Some of you may be aware that at university I studied Ancient History and Archaeology. I focused on Classical Greece and Herodotus’ Histories ranks amongst my favourite books ever. It’s a rich account of a number of legends and historical events centred around the events of the Second Greco-Persian War, when Xerxes invaded Greece in 480-479BCE.

300: Rise of an Empire, starring Sullivan Stapleton as Themistocles, Eva Green as Artemisia and Lena Headey as Gorgo, is not based upon Herodotus’ Histories. It is based upon the comic Xerxes by Frank Miller – which in turn is presumably meant to be based on the events of the battles of Artemisium and Salamis in Herodotus’ Histories. With the threat of Persian invasion, Themistocles leads the Athenian navy to repel Xerxes’ fleet, led by Artemisia, and seeks assistance from the Spartans, now bereaved of their king Leonidas and led by Queen Gorgo. 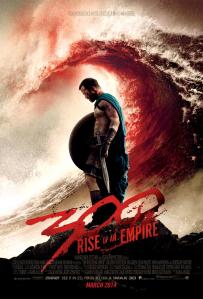