This will be the last weekly update, finishing off 2015. Future progress reports for the One Million Words challenge will be monthly. I am aware that they are not popular posts and would prefer to spend my time on Monday mornings more productively – whether that’s writing fiction or planning more interesting blog posts.

The Coronation cloak story I got an inkling of at the end of last week has grown. Those words aren’t all on the same story, and I don’t in fact have one file containing the whole story, but I’ve got all the components and now just need to organise it and put it all together, then cut some extra bits and sort it all out. I think in the week to come I’ll put aside the larger stories and focus on getting this into shape. I should have time on Thursday to really have a go at it.

Yesterday, having finished with Coronation cloak, I had to start a new story. I struggled to think of anything and went browsing around the internet, following a thread about interesting bridges, then bridge disasters like Gallopping Gertie or the Silver Bridge collapse, so I figured that’d be good prompt – a collapsing bridge. I’ve been back immersed in South American cultures again recently, after rewatching the Jago Cooper documentaries. Mountain Story and Coronation Cloak are both set in these kinds of cultures – in fact the inspiration that turned the prompt (a treasure and a cloak) into the coronation cloak was an Incan cloak. 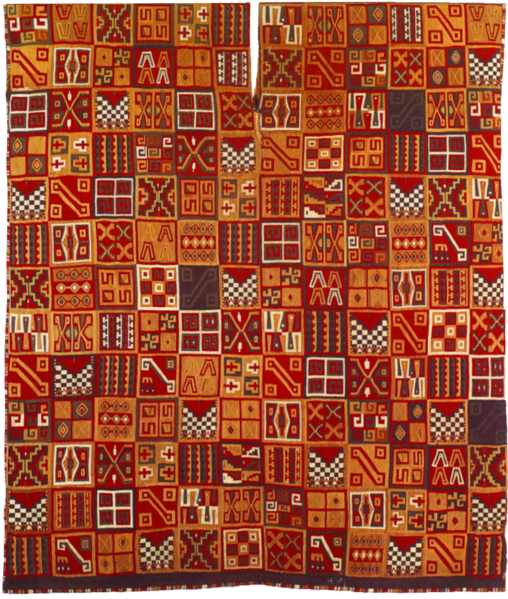 It’s richly decorated, made up of square motifs, and while I don’t know if the original’s squares represented anything, in my story I envisioned each square to be the symbol of a different community which combined make up a kingdom – making the cloak a symbol of the kingdom’s unity and a requirement for coronation.

The result is that the bridge in the new story, as well as the culture it exists within, are inspired by Andean cultures. The bridge is a reed woven one, like the Q’eswachaka bridge in Peru, complete with an annual renewal tradition. So the story is about it being destroyed by bad weather, and having to be rebuilt without the builders having the means to cross by the old bridge to help them, at the wrong time of year for it. My protagonist is a young woman who was meant to be marrying a man from the other side, but the bridge destruction delays their wedding. Could be a very short one, once I’ve got my head around it. What I wrote for it yesterday was mostly waffle.

I’ve been thinking about these Andean cultures and wondering if perhaps this would work better for Horrible Monster. The setting for Horrible Monster is pretty vague, besides a hierarchical system and one magical element. Aside from that I sort of assumed a late medieval/rennaisance sort of setting, but never quite liked it. With a culture inspired by the Incas, set in the same world I’ve been using for Kell’s Adventures, Mountain Story, Coronation Cloak and others recently, but at a later period, it might work. It needs to be a big city with docks, set in a territory that’s quite extensive, but all that could fit in the Inca-inspired culture. The docks don’t have to be on the sea, but could be on a lake much like Lake Titicaca. I’d need to change one or two details, but it’d still work fine.

So that’s something I’ll try to work on this month – getting the setting straight for Horrible Monster.

I am also aware I’ve spent almost no time on Kell’s Adventures recently. Nor have I typed up the Mountain Story and worked on that. The Mountain Story is a standalone story, and so I’ll focus on that once I’m done with Coronation Cloak. I’ll try to work on getting Kell’s Adventures sorted out, but at the moment I think it is low priority. I’ve got two stories sitting on my computer or in a notebook that have solid first drafts and need no major changes, so I think it’s not an unreasonable goal to complete them by the end of January.